The Development of the Brief Social Desirability Scale (BSDS) 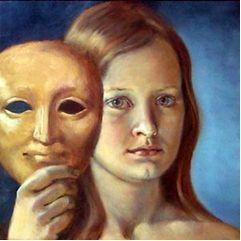 The Questionnaire, Scoring Manual, Procedure for Its Administration and Permission for Use Can be Requested from the Author at r.haghighat@lycos.com

[The author requested to add this note post-publication on July 4th, 2013.]


Introduction
Social desirability factor, which is defined as participants’ tendency to give ‘desirable’ answers in response to attitudinal questionnaires in order to put forward a more socially acceptable self-image is likely to take on pivotal importance when another questionnaire probing sensitive areas of private feelings and behaviour for example related to discrimination and stigmatisation is used. Respondents may answer in a socially desirable way because, for example, there is no flesh-and-blood psychiatric patient asking to rent a room in their homes. This tendency in pencil-and-paper surveys is likely to be a defence to present oneself as a ‘good’, ‘fair’ and ‘impartial’ citizen against the ‘threat made by questions’ or to comply with the experimenter by responding in such a way as to confirm the hypothesis tested. For example, in relation to attitudes to people with mental illness, there are at least two sets of data which support that people tend to respond in a socially desirable manner when asked questions about their attitudes towards patients with mental illness. The first is the fact that those variables that generally predict higher tolerance and positive attitudes such as higher social class, higher education and occupational status and income also typify communities that, in effect, resist the establishment of mental health facilities in their neighbourhoods (Segal et al, 1980). Also, participants interviewed about their attitudes towards a mental patient’s ‘need to find a place to live’ were significantly less willing to take part in a similar interview in future (compared with participants interviewed about a medical patient’s similar need) even if they asserted that they would welcome such patients. This means that people may indeed find it disagreeable to think about a mental patient moving into their neighbourhood (Farina, 1998, p. 252) even when they verbally respond that they would be tolerant. Though neither Segal nor Farina have looked at the above from a social desirability point of view, their findings support the idea that people tend to resort to social desirability in their responses to sensitive questions.
What attitudinal questionnaires measure is therefore likely to be distorted by the social desirability factor. This means that the corruptive effect of this factor is likely to affect the validity of these questionnaires in that what is being measured is not strictly speaking what is meant to be measured but a mixture adulterated with attempts to present ‘desirable’ feelings and actions in order to ‘satisfy’ the research team. Thus the administration of a social desirability scale along with questionnaires scrutinizing personal feelings and behaviour is necessary to ensure that what is being measured by the questions is nearer to what is supposed to be measured.
Existing social desirability scales such as the Marlowe-Crowne inventory (1960) have the disadvantage of being relatively lengthy and as a result lead to lack of participants’ co-operation especially when administered along with another lengthy attitudinal questionnaire. There are reports indicating that several of its 33 items contribute little to the overall measure (Strahan & Gerbasi, 1972) so the latter authors devised shorter scales, one with 10 items. One example of the usefulness of the shorter forms of SD scales can be found in Riedera & Ruderman (2007). Nevertheless, none of the shorter scales has been designed for use in psychiatric patients. The idea of the need for such a scale came up when an attitudinal questionnaire on the stigmatization of schizophrenia by patients was given to patients with schizophrenia (Haghighat, 2005) and it was necessary to eliminate those with high social desirability scores from the computations. The briefer versions of Marlowe-Crowne social desirability scale are unsuitable for use in patients with schizophrenia or depression, and in general in psychiatric patients. Some items in the shorter versions such as “there have been times when I felt like rebelling against people in authority even though I knew they were right” is rather heavy for people with poverty of thought and other negative symptoms of schizophrenia such as apathy to conceptualize and answer in a socially desirable or undesirable manner. Other items such as “there have been occasions when I felt like smashing things” are unsuitable for use in people with schizophrenia with a history of agitation as an affirmatory response to such questions (taken as evidence of a lack of social desirability) is more likely in people who tend to be habitually stimulated or agitated, and so liable to acting out and outbursts. Also, apathy, poor concentration and lack of motivation, etc. are likely to reduce their co-operation with these scales when they are used with other still lengthier questionnaires.

Method
It is widely recognized that reducing the number of items in a questionnaire may reduce its reliability. The common variance would have a tendency to be low and, as a result, the measure might be unstable. An objective was set to produce a 4 to 5-item social desirability scale suitable for use in psychiatric patients of which the reliability equals at least the minimum reliability of the 10-item version of Marlowe-Crowne Social Desirability Scale. This figure was taken as a standard to achieve in the development of the Brief Social Desirability Scale (BSDS). A preliminary scale for BSDS was built composed of five questions (Table 1) based on a record of daily conversation of patients and their relatives
in their homes in the context of a wider study of patients and relatives’ attitudes described elsewhere (Haghighat, 2007). Each question has two possible answers: Yes or No and only one of them was considered to be a socially desirable one. For example, in response to the question: Do you always practise what you would preach?, ‘yes’ is supposed to be a socially desirable answer and gets a score of 1 while ‘no’ is not a socially desirable answer and gets a score of 0. In order to compensate for the effect of response sets, the questions were designed such that two needed ‘no’ as an answer, and three needed ‘yes’ in order to mark a score on the social desirability scale. The aim was to devise a brief measure of social desirability that, given possible length of other questionnaires concurrently administered, is practically acceptable to participants, and, at the same time, allows screening out those with an uncomfortably high tendency to give socially desirable answers. As some culturally sanctioned ideas such as “Always practice what you preach” is common in the general public including patients, it is not surprising that the relevant item in the BSDS replicated that in the Marlowe-Crowne social desirability scale. 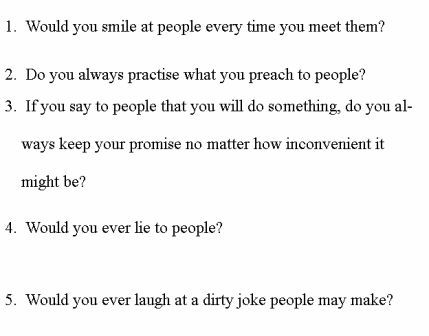 Table 1. The preliminary list of questions assessing the social desirability factor. The first four of these questions proved to be valid in both genders on cross-validation and constitute the final version of the scale. The questions were asked in conjunction with a questionnaire on stigmatization towards a man with schizophrenia, and the word ‘people’ in the original questions was formulated as ‘this man or other people’. 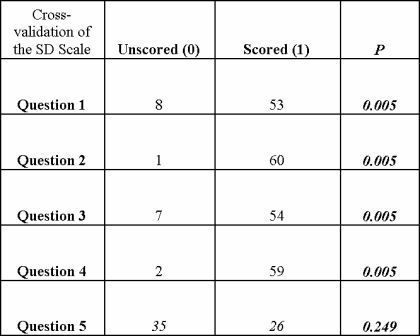 Table 2. Differences between the proportions of the participants recognizing as socially desirable the scored versus unscored responses to the questions on the SD scale. For questions 1 to 4 there is a significantly higher number of participants responding in the scored direction as such confirming that the corresponding item measured social desirability. Chi Square Test.

There were no significant differences between proportions of male and female students’ responses in the socially desirable versus socially undesirable direction, i.e., all these questions were suitable for testing social desirability equally well in both genders except for the fifth question (p < 0.02). (Table 3). 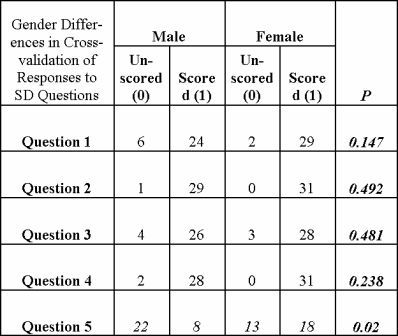 Table 3. Differences between male (n = 30) and female (n =31) undergraduate students in their recognising as socially desirable, scored versus unscored responses to the questions on the SD scale. There are no inter-gender differences for the majority of the questions on the scale. Cross-tabulation. Fisher’s Exact Test; two-sided.

It is interesting to notice that the fifth question was a good measure of social desirability in the male students (p < 0.01). Most these participants said they would consider ‘Yes’ to be the socially desirable response to question 5 as one is supposed to laugh at such a joke in order to save the face of the person who has tried telling it. But this was not the case for females (p < 0.369) who did not show a significant preference in either direction. For some female participants the socially desirable response was like that of the majority of males, and for other females the opposite: the socially desirable behaviour would be not to laugh at a dirty joke. This confirms that cultural norms that delimit the behaviour of women are at times different from those guiding the behaviour of men (Goldfried & McKenzie, 1962).

Result and Conclusion
The Brief Social Desirability Scale (BSDS) has four questions, is valid and reliable and free from gender specificity. The significance of the scale became more evident subsequently in the factor analysis of the questionnaire on stigmatization (Haghighat, 2005) in that retaining those participants with high social desirability scores in the computation disrupted derivation of stigmatisation factors. BSDS has the advantages of brevity and practicality. It can be used before administering attitudinal surveys and the results of the survey compared including and excluding those with high social desirability scores. The cut-off score can be set from anything > 1 (more than one socially desirable answer) to > 2 (more than two socially desirable answers) to exclude people with a high tendency towards social desirability from the computation. The exact cut-off level will depend on how important it is to get results of the other questionnaire from people who answer more transparently about their personal attitudes.
As is the case with all brief scales, the BSDS is preferred in many test situations where the administration time is limited or subjects are unable to tolerate lengthy questionnaires and the related drop in reliability remains tolerable.

Biographical Note
Rahman Haghighat studied French Civilization at Sorbonne University in Paris and graduated in Medicine from the University of Birmingham, UK. He did his internship in clinical medicine at Cambridge, got his specialties in psychotherapy from the Tavistock Clinic, London, psychiatry from University College London (UCL), and a PhD in sociology from UCL. His research project was graded as alpha by the British Economic and Social Research Council. He is the author of several papers and book chapters on the origin of stigmatization, hope and defences against despair and suicide in people with schizophrenia, preventive strategies in schizophrenia, and models for enhancing self-esteem and social integration of users in mental health. His contribution to psychology includes the development of scales for measuring stigmatization and social desirability. His most important contribution to Sociology is his unitary theory of stigmatization which is a construct for understanding the root cause of discrimination in human societies.
E-mail: r.haghighat@lycos.com