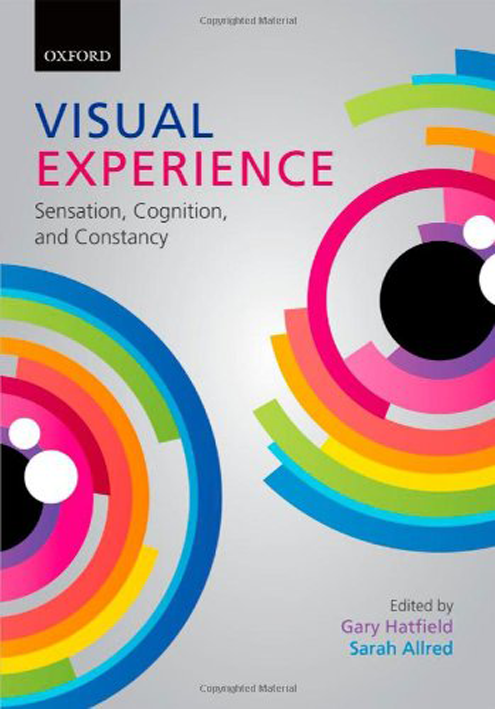 Hatfield, Gary, & Allred, Sarah (Eds.). (2012). Visual Experience: Sensation, Cognition and Constancy. Oxford, United Kingdom: Oxford University Press. 264 pp. ISBN 9780199597277.
Mankind has always been interested in the way people perceive the world and this has become one of its main concerns reflected in the fact that early explanations for visual perception date back to ancient Greece. Studies of visual perception were pursued merely in the field of philosophy until the 20th century, when psychologists, and thereafter neuroscientists, formulated their contributions to this topic. But what are the recent theories and findings regarding visual experience and, what have been the recent developments in related fields such as the psychology and philosophy of visual perception? Visual Experience: Sensation, Cognition, and Constancy deals with important questions about visual perception that concern the philosophers and psychologists of our era, with a focus on the phenomenal appearances of size and color. This volume, which is emerged out of a research workshop on Cognitive and Developmental Factors in Perceptual Constancy, held at the Institute for Research in Cognitive Sciences (IRCS) of the University of Pennsylvania in February, 2009, includes both psychologists’ empirical and philosophers’ phenomenological points of view on spatial and color perception. The volume is edited by Gary Hatfield, Professor of Philosophy at University of Pennsylvania, who is trained in experimental psychology, history of science, and philosophy, and Sarah Allred, Assistant Professor at the Department of Psychology, Rutgers University.

This volume consists of three parts and eleven different chapters: in the first part, cognitive and phenomenal factors in spatial perception are dealt with; in the second part, historical and conceptual issues of visual perception studies are presented; and the third part examines the contributions of memory, computation, and inference to color constancy. The chapters of this volume are written by experts, scholars and eminent researchers in the field of vision perception. As the chapters do not follow a specific theme and due to their diversity, in what follows, each chapter is separately dealt with.

In the first chapter, Granrud, describing his experiments regarding size constancy, investigates perception of size from a certain distance in children and shows age related changes in size estimation accuracy. He shows that humans at different ages use cognitive strategies to compensate for underconstant perception (i.e., when the observer sees the distant objects as being smaller than they really are) at far distances. He suggests that developmental changes in size-estimation accuracy “results from the development of reasoning abilities and deliberate strategy use” (p. 13).

In the second chapter, Hatfield describes two mechanistic views on size constancy in spatial perception: two- and three-dimensional sensory cores corresponding to the retinal image. He rejects two-dimensional sensory cores – perceptions lacking depth and corresponding to linear perspectives, which are then elaborated by cognitive judgment leading to visual constancy. Instead, he offers a 3D projection of the phenomenal world – the visual experience with normal and systematic underconstant perception. Hatfield proposes that visual experience contains phenomenal and cognitive modes at the same time, leading for example into the phenomenal perception that railroad tracks converge in the distance, and also to the cognitive awareness that these tracks are physically parallel.

In the third chapter, Wagner reviews the size constancy research that has been done over the last century, and gives a brief overview of the recent size constancy literature. He explains the basic concepts of size constancy (e.g. ‘constancy’: when the “observer accurately adjusts the near comparison to match the standard at all distances” (p. 63); ‘overconstancy’: when the observer sees the distant objects as being larger than really are, and ‘underconstancy’ as mentioned above). Wagner then, describes the factors that are investigated in size constancy, such as effect of participant age, cue conditions, stimulus orientation, and instructions, and how they influence size perception. Finally, Wagner explains his mathematical model for size constancy data, which serves as an explanation for precision in size constancy based on the amount of information that hits the retina, a factor dependent on the visual angle.

In the fourth chapter, Durgin, Ruff and Russell try to provide an evolutionary and adaptive explanation for the existence of a systematic underconstancy, and relate it to our abilities for self-motion awareness and coordination. The authors then discuss views and theories on depth perception emerging from monocularly and binocularly. In the next chapter, Gilchrist deals with the objective and subjective sides of perceptual experiences and their difference as two approaches regarding experimental investigations. Gilchrist defines and separates these two sides and explains how Gestaltists opposed this dualism and still how the dualistic view (subjective/objective sides of perceptual experience) persists today. By emphasizing on the difference between sensational and cognitive judgments, he cautions that the instructions during experiments must be carefully worded and defined whether to evoke a sensational or a cognitive judgment in the perceptual experiments.

In the sixth chapter, MacLeod rejects the notion that perception is independent of the observer’s affective state and previous experience. He explains that our visual perception is affected by neural top-down (cognitive) influences, as neurons of all cortical areas are connected via feedbacks to other cortical areas, which consequently leads to a discussion of subjective attentional priorities and experiences. In the seventh chapter, Clark defines and explains the notions of the ‘appearances’ of perceptible items –the properties that the subject perceives– and their ‘phenomenal’ properties–how things appear according to subject’s mental state. To discuss these notions, he uses examples of perceptual illusions on lightness and brightness. Clark argues that through three processes of perceptual grouping, perceptual organizing and attention, we add inexistence elements to items to yield ‘phenomenal’ results.

In the eighth chapter, Cohen tries to bring our focus to the fact that visual perception can consciously represent contradictory presentations of a specific phenomenon simultaneously, creating a dual representation which he calls the puzzle cases. Then in the rest of the chapter, in a philosophical approach, he tries to answer how these dual representation views happen and how we perceive these two properties distinctly. In a philosophical argument, Cohen emphasizes his computational view which relates to the difference between the perceptual input and output stages of the perception creating disparate perceptions and contradictory properties of a specific object.

In the ninth chapter, Olkkonen, Hansen and Gegenfurtner discuss why color vision is important and ecologically adaptive as a perceptual ability and suggest that color vision facilitates object discrimination while avoiding numerous and confounding possible perceptual states of the world. Color constancy enables identification of a given object despite the variation in illumination. Thereafter the authors review the literature on the investigations of ‘memory color’, which is the effect of the prior experience or previously seen color of a thing on the current color perception of that thing. The authors introduce their novel experimental method for the memory color investigation which is the adjustment of stimulus color by the observer to avoid the possible confounding effects of color memory. Finally the authors of this chapter discuss the effects of prior knowledge of color appearance on object identification.

At the beginning of the tenth chapter, Hilbert explores color constancy under different illuminations and claims that the phenomenology of color constancy is not stable. The rest of the chapter gives a philosophical take on the limitations in the definition of concepts like computation, judgment and inference. In the eleventh chapter, Sarah Allred brings up the topic of ambiguity in color experience (ambiguity in image formation, visual ambiguity due to the physiological properties of the photoreceptors and the existence of noise in the physiological system) and suggests a Bayesian computational approach to the problem of sensory ambiguity and information loss.

Although they converge under a main topic, each chapter of this volume could be considered as a separate paper. Also, in some chapters, the reader is confronted with philosophical claims which seem hard to test and are non-falsifiable claims, aiming to answer the proximal mechanisms of perception (e.g., Cohen’s “Computation and the Ambiguity of Perception”). In addition, like Allred’s chapter, the volume could have benefited from more neuroscientific perspectives, such as those underlying the neuronal mechanism of color constancy and reflection properties, and visual evoked potentials recordings in the investigation of color vision, to name just a few. Another approach that the book could be benefited from would be the study of non-human animals’ visual experience regarding color constancy and visual cognition.

This volume represents the recent fundamental theories and findings concerning visual experience through the works of leading scholars and professionals of the field. A key strength of this volume, unlike many similar books, is its tolerance towards opposing ideas and views, as the authors of different chapters have different views and sometimes contradictory opinions about a specific topic, making the volume’s overall attitude unbiased. The book is unique in the way that it shows the recent understandings in the philosophy of perception, which could be considered in line with the classic works such as Kant and Merleau-Ponty on perception. Also this volume could be considered as a follow-up on Hatfield’s previous volume, Perception and Cognition: Essays in the Philosophy of Psychology (Hatfield, 2009), which is his perspectives on different aspects of vision from theoretical issues in visual perception and cognition to color perception.

Due to the nature of the volume which is a discussion regarding the recent findings in visual experience with a focus on the philosophical point of view, it seems that the book is written mainly for the professionals of the field and does not seem to be an easy read for non-professionals and general readers. Visual Perception is therefore an essential resource for the professionals and researchers in the fields of visual perception, theory of mind and philosophy of science.